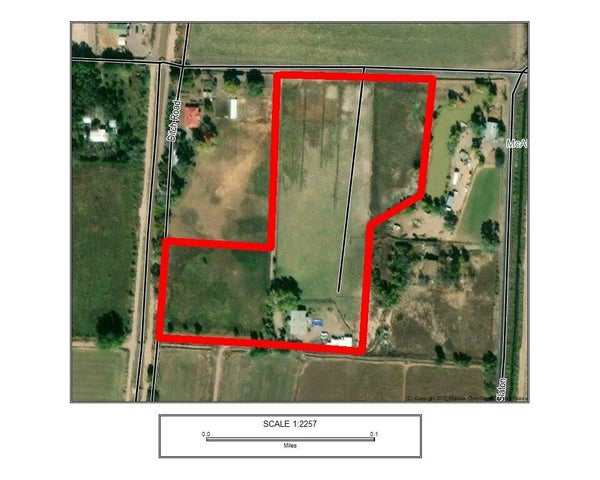 Property Description
9.85 Acres of Farm Land, Home, and 18 acre feet of verified Pre-1907 Irrigation Water Rights in Lemitar, NM. 6 miles NE of Socorro and one hour from Albuquerque, NM. COMMENTS: It is difficult to find good farm ground with its original water rights intact and a home on it! The Maese Farm is located in a beautiful farming community. The farm is currently planted in permanent pasture. There are big standing cotton wood trees around the house and fruit trees. This is an excellent opportunity to own a farm in a historical part of New Mexico!

Details
Maps
Contract Information
Listing Price: 410000
Current Price: $410,000
On Market Date: 2021-02-08
Status: Active
Location
Street Name: 68 Schmittle Rd.
County: Socorro
City/Town Code: Lemitar
State/Province: NM
Zip Code: 87823
Directions: 6 miles north of Socorro. Call listing broker
Geo Lat: 34.134809
Geo Lon: -106.892338
Area: 620 - North Socorro
Zone Atlas: NOZA
General Property Description
Property Sub-Type: 1
House on Property: Yes
Included: Yes
Acres: 9.8
Lot SqFt: 426888
Lot Size Source: Survey
Apx Deeded Acres: 9.8
Subdivided: No
Livestock Included: No
Private Hunting: Yes
State Hunting: No
Title: Fee Simple
Flood Zone: A
Tax & Legal Info
UPC Code: Not Available
Short Legal Desc: MRGCD Map 156 Tract: 21B1B1A-1.716 ac MRGCD Map 156 Tract: Tract B 2.352 ac MRGCD Map 156 Tract: 21B1A2- 5.790 ac
GRT Code: 25-025
Current Taxes: 125
Tax Exemption: No
Sales Info
Trade/Xch Considered: No
Property Features
Possession: Day of Funding
Type Lease: None
Property Access: Paved Road to Prop
Utilities: Electricity Connected; Water Connected
Wastewater: Septic Tank
Water Source: Community Water; Private Well
Docs/Data Available: Deed
Timber/Mineral Right: Mineral Rts Unknown
Topography: All Level
Finance Considered: Cash
Zoning: A-1
Supplements
IMPROVEMENTS: The house is a 3,400 sf country farm house with an open floor plan. It is a 3-bedroom, 1 full bath, 2- ¾ baths, and laundry room. Other improvements are pipe corrals, 2 covered stalls, pump house, woodshed, and other outbuildings. The construction is 2x6 frame with exterior stucco and a shingled roof. The house is heated by electric base board heaters and wood stove. It is cooled by a swamp cooler. WATER: The farm comes with 18 acre feet of Pre-1907 irrigation water rights that have been verified by the New Mexico State Engineer. Of the 3 parcels being evaluated the larger one has already been approved. The residence is on community water. The corrals and yard is on a private well. ORCHARD: There is 1 apple, 1 apricot and 1 pear tree. ELEVATION: 4616 feet ANNUAL TAXES: The total approximate taxes on this farm is $125. SCHOOLS: There is an elementary school 4 miles away from the farm and the nearest high school is 6 miles away in Socorro. A Little bit of interesting History: Lemitar's population was about 400 people in 1850 to 1860. Between 1870 and 1885, the population grew to around 800. During these years, several events put Lemitar into the history books. First is probably the most famous resident, Governor Manuel Armijo. He served as the last Governor of New Mexico under Mexican rule. After surrendering New Mexico to Gen. Kearny in 1846 during the Mexican American war, he was arrested and sent to Mexico City for cowardice and deserting in the face of the enemy. He was acquitted of these charges after proving his 400 Mexican soldiers were no match against the 1,500 Americans that entered Santa Fe. His surrender was to spare bloodshed of his countrymen. After his acquittal, Manuel Armijo returned to his family home in Lemitar in 1850. He farmed and ranched on his property east of the Lemitar church. Armijo died in 1854 at 60 years of age. Manuel Armijo's brother, Juan, lived across the river in Sabino. There is a strong local legend of buried treasure related to the Governor. One version states that upon his return from Mexico, Manuel Armijo buried a chest of gold coins somewhere on his property. After a couple of years of the location being trampled by his sheep, he was unable to find the buried gold before he died. The buried Mexican gold coins are still buried somewhere east of the church. Another version states he buried the gold behind his Lemitar home. Upon his death, his brother, Juan, hired a Navajo to dig up the chest of coins and had it reburied near his home in Sabino. After the treasure was reburied, Juan Armijo killed the Navajo to leave no witnesses. With this version, the treasure chest remains buried somewhere on the east side of the river from Lemitar. As far as anybody knows, the treasure has never been found. Lemitar  County Seat In 1854, shortly after the death of Manuel Armijo, the county seat for Socorro County was transferred from Socorro to Lemitar for undocumented reasons. Perhaps it was to honor the late Manuel Armijo.